Start Writing and Get Us Laughing Contest Submission: Who Put a Hex on Us?! 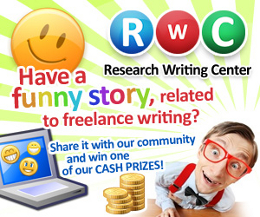 As you probably know, a couple of weeks ago we’ve announced the winners of the latest contest from the ResearchWritingCenter.com.

The point of the contest was pretty simple – write an amusing story about freelance writing (fictional or from your won experience).

Make sure check back next week – another submission will be waiting for you!

“Freelance Writing: Who Put a Hex on Us?” by Nalin S.

When I first started freelance writing, my parents, friends and relatives or almost everyone I know were totally against it. Even I wasn’t sure if I was ready for it or not as I had a degree to pursue, which if I was to take up freelance writing, had to be set aside for the future. Confusion was paramount and I was being asked questions by my mother, “Who put a hex on you, my child?” to which I had no reply.

Being completely new to this field, I read various articles on how to start up freelance writing and the first thing I read was I should be able to use the computer. Well, I had never worked a computer before in a professional way. As I was serious enough to learn it, I took classes from my brother who had expertise in computer applications which was kind of funny as he is 4 years younger than I am.

Every day he used to give me those looks of disappointment of being his brother for I didn’t know the basics even. Anyhow, after 3 months I was technically equipped with my little brother’s applicative concepts.

Now, all left was getting orders for freelance writing, which again left me laughing at myself as I had no clue where and whom to ask from. So I gathered all my memory cells at one point to concentrate and think of someone who was in this business and was happy doing it.

I called up my friend who had been a freelance writer for the past 1 year, hoping he would be happy with the job. He told me that it was very foolish on my part to take up freelance writing and leave my degree. That day I learnt one thing that the world would never understand that if you love doing something, it is you who has to take a stand for it, even if it meant leaving something substantial.

So moving forward from the philosophical masterpiece of mine, I somehow managed to get a few contacts from whom I could get orders for freelance writing. After 3 hours of laborious calling, I finally managed my first write-up for which I was getting $5 for the whole write-up. If I said that the money wasn’t important to me, I would be lying, so yes, I thought to myself if I had made a correct decision a year ago. I kept this feeling in my head and wrote from my heart.

Today, I feel happy about being a freelance writer as it does not burden me with things I don’t like, it pleasures me with things I like to do. The computer has been tamed now and my little brother surely gets his monthly allowance from his big brother, who is not so much worthless now.

Editor’s note: Thank you, Nalin, for participating in the contest! Good job! Thank you to everyone, who voted for this submission. See you soon, guys!